It's the lovely Sue's turn to share her second project today with a fabulous page from her journal. 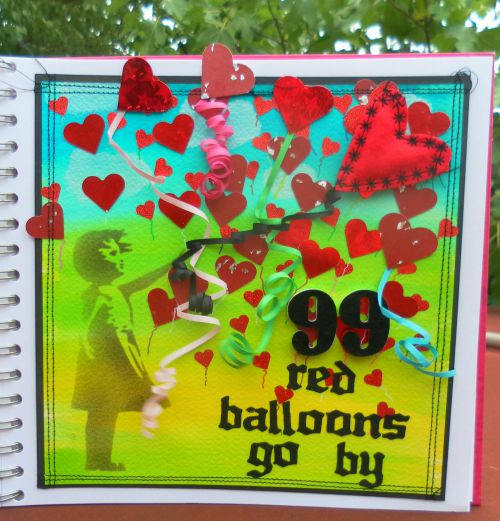 For my second piece I've gone back to the 1980's (did you see what I did there, more numbers lol) and one of the most annoying songs ever...
For more pictures click here for my blog.

Haha Sue I remember it but couldn't think what it was all about so I looked it up. Apparently it is an anti war song, although the English version has slightly different lyrics to the original German one
If you want to listen to it, you can find it here on You Tube. Wikipedia explains that the lyrics of the original German version tell a story: 99 balloons are mistaken for UFOs, causing a general to send pilots to investigate. Finding nothing but child's balloons, the pilots decide to put on a show and shoot them down. The display of force worries the nations along the borders and the war ministers on each side bang the drums of conflict to grab power for themselves. In the end, a 99-year war results from the otherwise harmless flight of balloons, causing devastation on all sides without a victor. At the end, the singer walks through the devastated ruins and lets loose a balloon, watching it fly away.
Now don't ask what took me off on that tac but that's the musical history lesson over for today lol.
Thanks for the reminder of the song and a great page Sue.

We hope your week is going well.

The make must be made by you. Enter what genre you want, a maximum of 5 entries to our challenge and a maximum total of 10 challenges. The item must be posted on or after the date of the challenge. You must mention the name of our site, the specific challenge topic and link to us. Your entry must contain the link to THE SPECIFIC post and article you're entering not just a general page. Please do not enter anything that may be considered offensive. If you want a comment from us then it has to be a link to a site that does not require us to become a member to sign in. Any entry that doesn't comply will be removed at close of challenge without notification. Please read the FULL RULES HERE.

Help yourself to our buddy button

Thank our sponsor, visit the shop